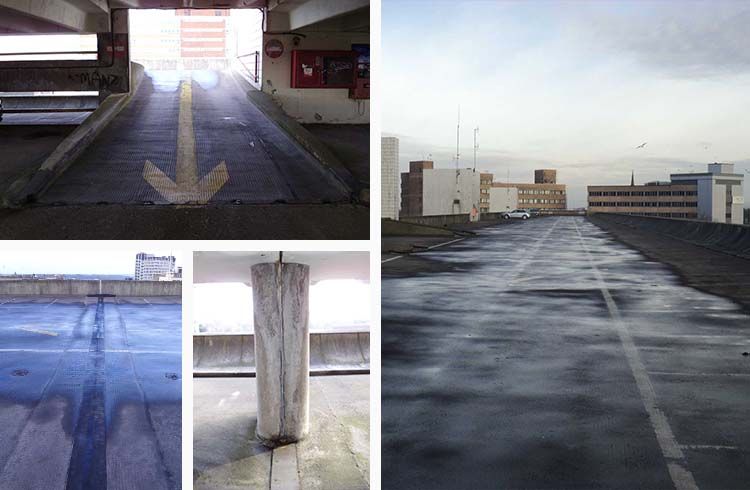 In October 2016, Triflex were invited by Triflex Authorised Contractor Makers Construction Limited, to provide a project specification for a waterproofing and surfacing solution to the multi-storey car park at Preston Bus Station. The bus station has undergone a multi-million-pound repair, renovation and modernisation scheme to create a vibrant public space.

Preston Bus Station is a Grade II-listed building, recognised for its 1960’s curved concrete fins which run the entire length of the building. The car park first opened in 1969 and was previously deemed to be the largest car park in Europe; supplying parking to over 900 vehicles. Today, the building aims to restore and preserve the iconic 1960’s design by incorporating a user-friendly, fresh feel to it's car park. Find out more about the history

The car parks area totals over 12,000m² and the project specified the treatment of the exposed car park decks, the two internal decks and all access ramps. The two internal decks are located directly above the busy bus depot and other occupied spaces, so required particular consideration for refurbishment. The project specification outlined that if a solution was to be provided, the solution must provide the ability to directly overlay the existing substrate in order to prevent any damage to below stores, loss of working hours and minimise overall costs.

The initial site survey established that the decks had suffered from years of heavy traffic, leaving the decks worn and bearing cracks, blisters and ruckling. In some cases, attempted repair works had been carried out which, unfortunately, had also failed, leaving the asphalt pulling away from the concrete upstands. During the survey, The Triflex Technical Team, conducted tests to determine the suitability of the asphalt for direct overlay and anticipate the level of preparation required before installation. 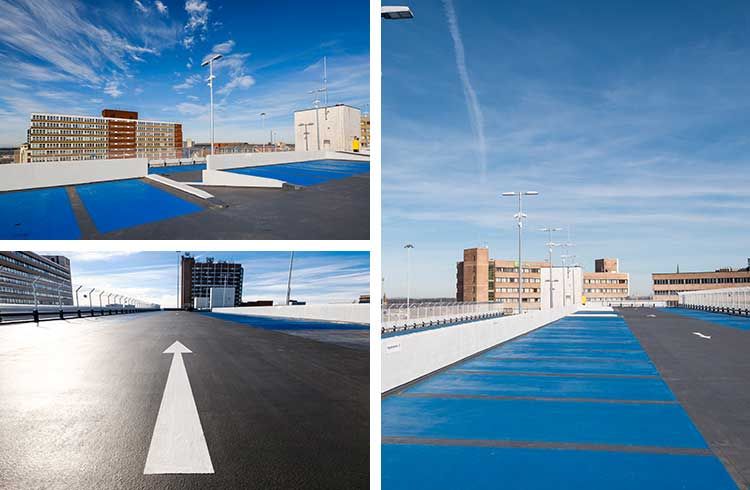 Triflex was specified to provide a waterproofing and surfacing solution at Preston Bus Station due to the systems ability to directly overlay the existing substrate.

The completion of on-site testing established that the best possible solution would be Triflex DeckFloor, a heavy duty, durable system which is compatible with virtually all substrates.

Triflex DeckFloor and DeckFloor Ramp systems were the ideal solution for this car park as they not only met the criteria for direct asphalt overlay but also provided the deck structure with high levels of resistance to chemicals commonly found in the car park environment namely; petrol, diesel and motor oil. Moreover, the high levels of anti-skid properties of the system would provide a safer environment for pedestrians and vehicles alike. Triflex DeckFloor Ramp, also incorporates the use of emery within its system. This, when installed provides a higher level of grip for climbing traffic.

Prior to installation the Triflex Technical Team recommended that the Authorised Contractors carry out pre-installation works such as, removing the clustered blisters and shot blasting the decks. By carrying out these pre-works it would ensure that the best possible adhesion between substrate and system is achieved.

Like all Triflex systems, Triflex DeckFloor is totally cold applied, improving safety and decreasing time on site. Furthermore, Triflex DeckFloor is exceptionally fast curing, allowing the system to be installed in stages and the car park to be reopened to the public quickly, minimising inconvenience. These properties coupled with the fast and efficient application by Makers Construction Limited allowed the car park surfacing to be completed quickly with minimal disruption to the public. 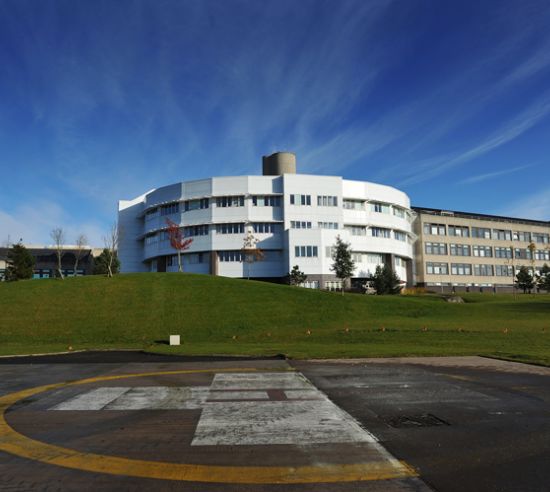 Ninewells Hospital
The hospital car park at Ninewells, Dundee outlined that their need for on-site parking was extremely high, as their current car park was suffering with water ingress from higher and causing structural damage and damage to parked cars. 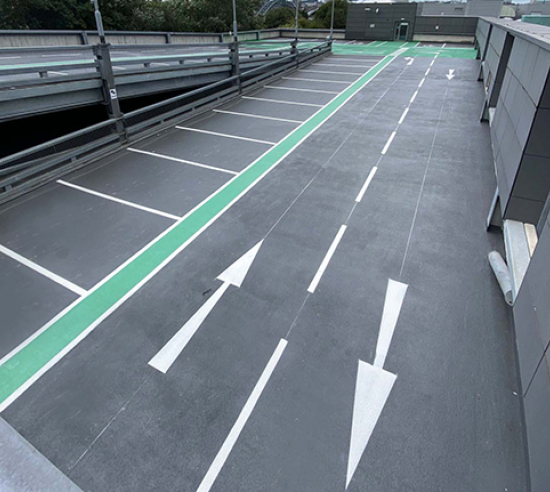 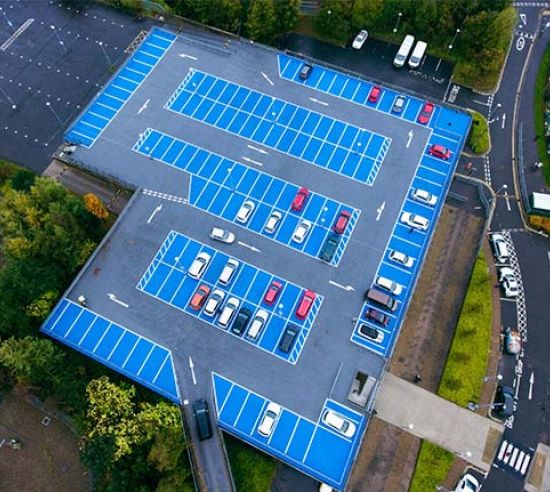 Edinburgh College
The top deck of the 25-year-old podium car park at Edinburgh College’s Granton Campus, was extensively cracked with ponding water evident. With concerns about water ingress into the lower level of the car park, causing long-term damage to the structure, action was required. 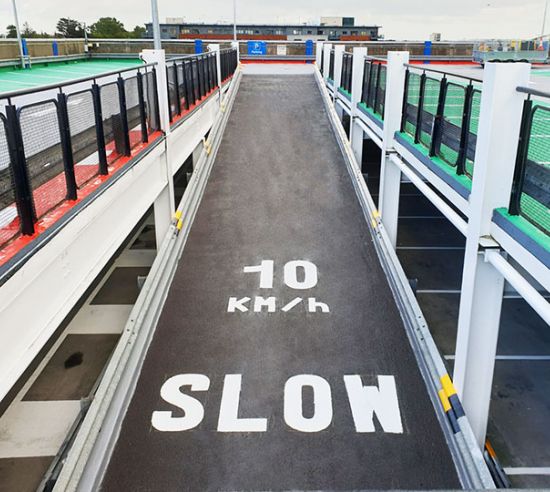 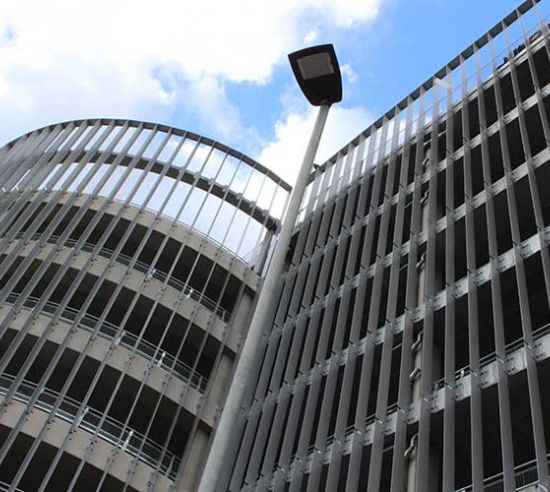 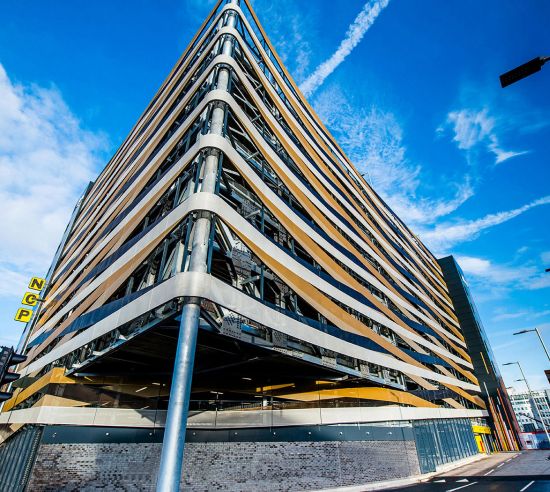 The New Bailey
Recently redeveloped the 9 storey car park wanted a smart, durable surfacing solution that would protect their car park for years to come. 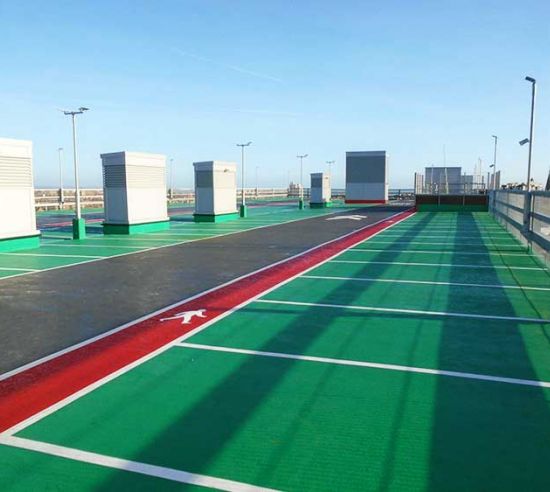 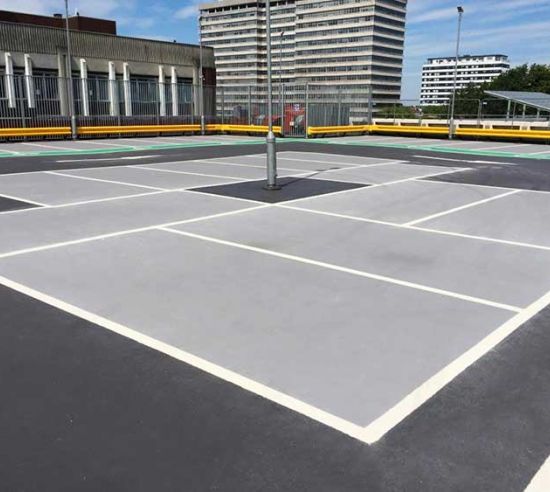 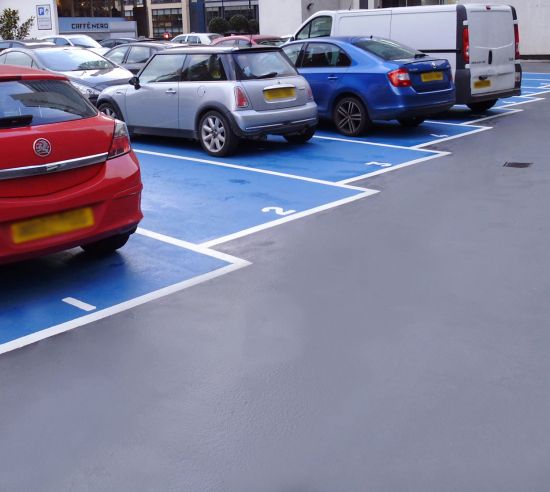 111 Piccadilly
To accommodate the vast amount of visitors parking, 111 Piccadilly boasts an open, surface car park to the rear that straddles the Rochdale canal. The inspection identified that the existing macadam surfacing had degraded, through constant trafficking and exposure to the elements. 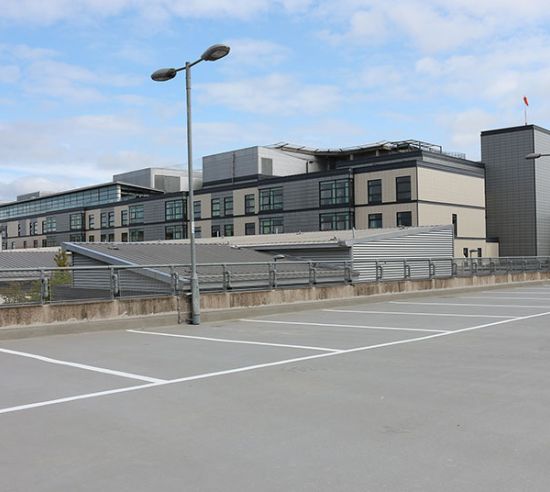 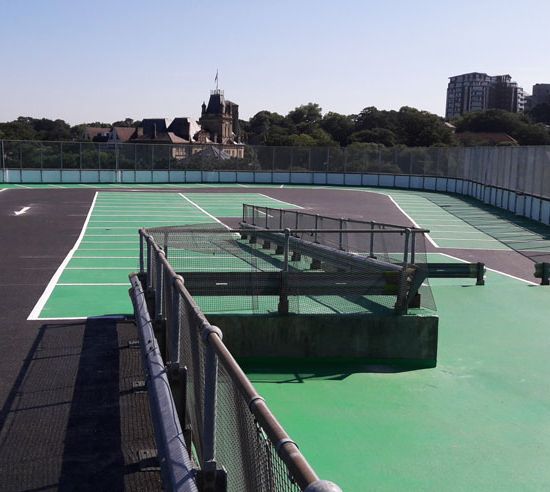 Avenue Road car park
This project required a waterproofing and surfacing solution that would meet the tight deadline to restore a council car park before the busy tourist season. 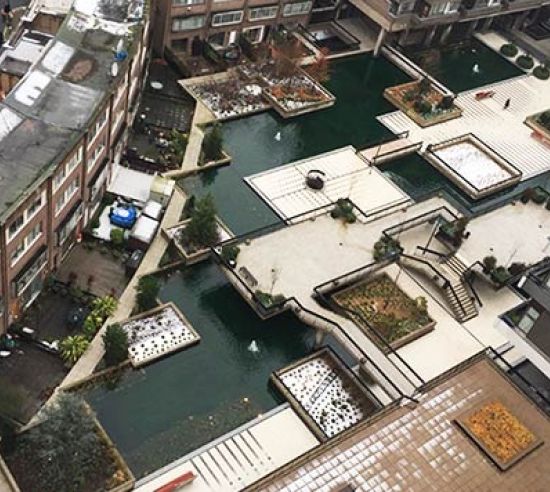 The Water Gardens
This project required the waterproofing of ponds containing valuable Koi Carp fish, concrete protection for planters with trees and aquatic plants, a buried reinforced waterproofing system for the podium decks and walkways, and waterproofing and surfacing to a service road. 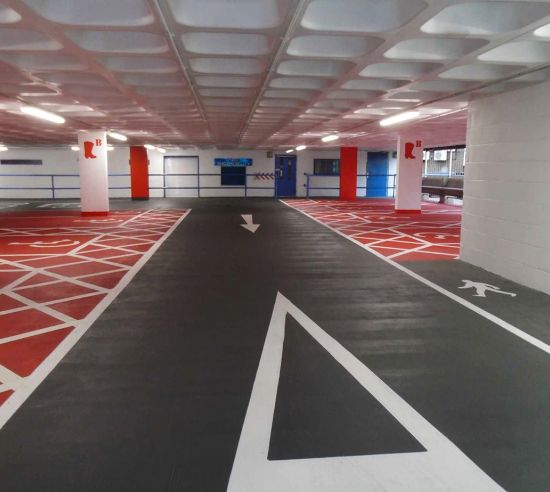 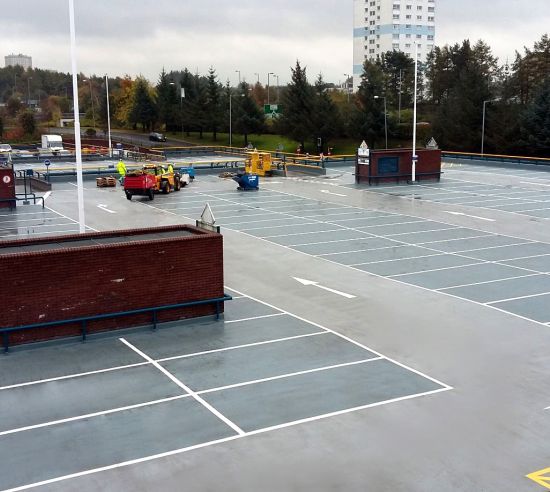 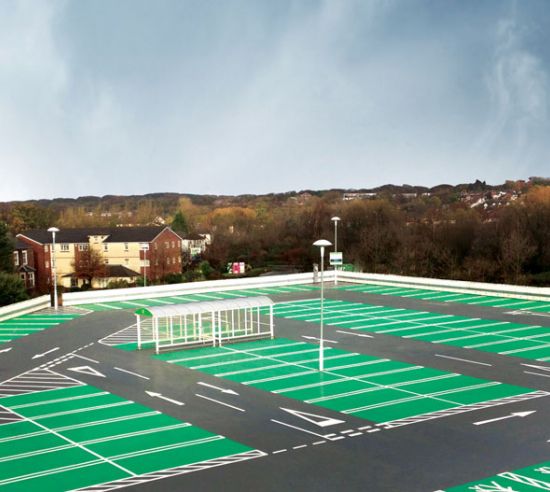 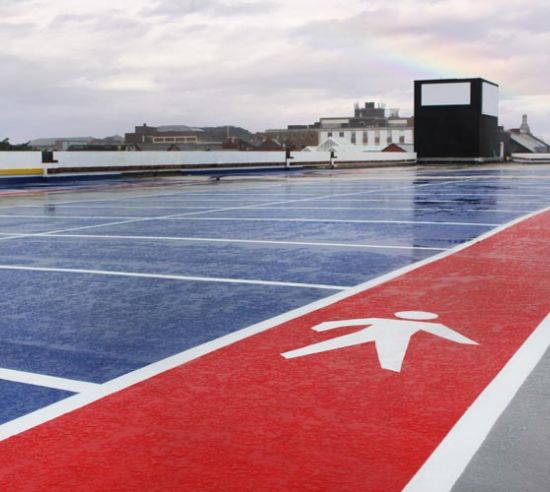 Tulketh Street
The multi-storey car park located on Tulketh street has recently undergone an impressive new retail development of 12,000m² multi-storey car park. The car park had not been used for some time due to the excessive damage to some of the decks. The renovation area included an internal deck an area over occupied premises and an exposed top deck. 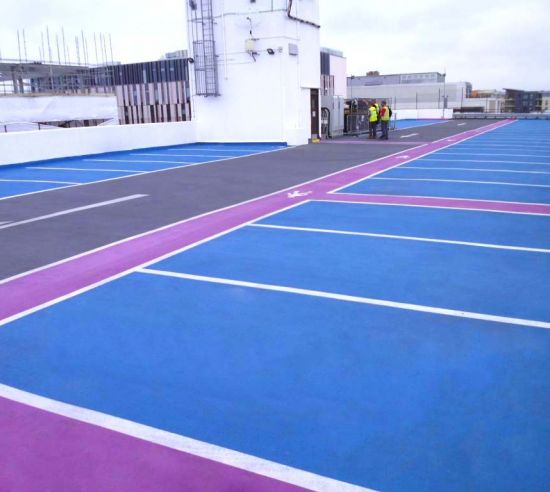 Sand Street
Sand Street, located in the bustling town of St Helier in Jersey, provides its residents with an abundance of local businesses, shops and restaurants and is also home to one of the main central multi-storey car parks which houses over 620 parking spaces over 14 levels. 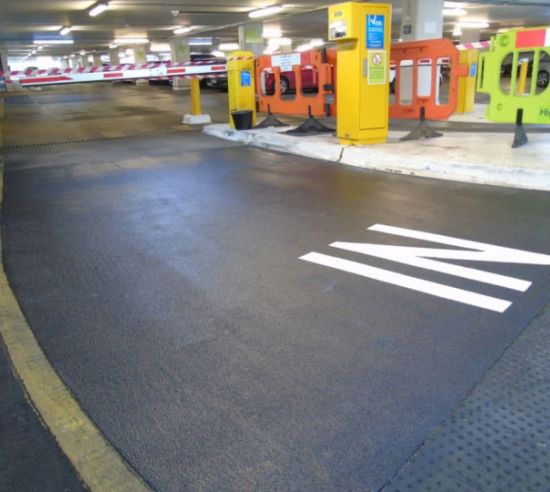 Trinity Square
Vehicles rolling along car park surfaces can generate an electrostatic charge. The car park managers required a surfacing solution that would remove the static charge which was giving their clients static shocks once touching the ticket machine. 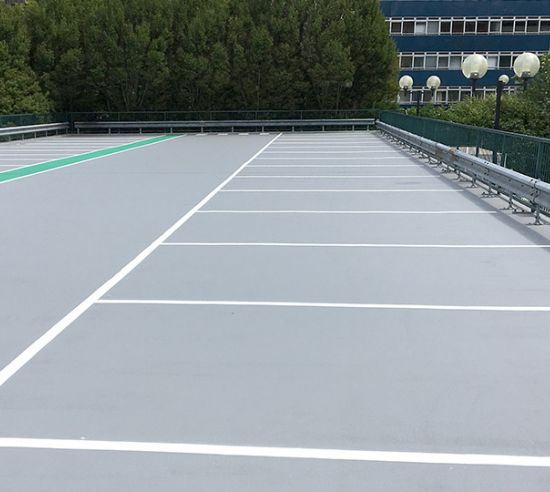